Get fresh music recommendations delivered to your inbox every Friday.
We've updated our Terms of Use. You can review the changes here.

My Astorian Queen (25 years on the New York Jazz scene) 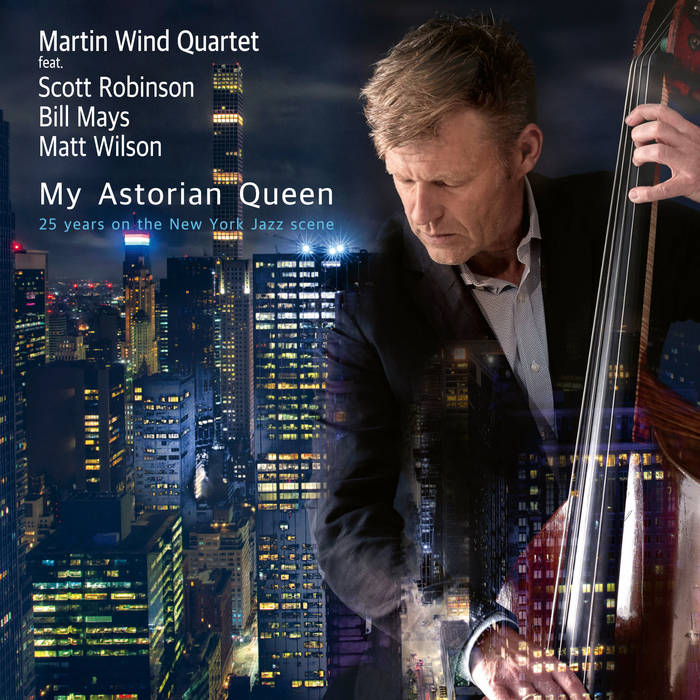 freejazzy Very enjoyable to listen to the band. 25 years? Sounds like 125 years on the scene and more. Every instrument masterly played and very well mixed. Above all one can absorb the full beauty of the double bass with all its nuances. Favorite track: Broadway.

George Gershwin wrote a song for Porgy and Bess called “There`s a Boat That’s Leaving Soon For New York.” Except for the fact that Martin Wind arrived at the Big Apple exactly 25 years ago by plane a lot of the Gershwin opera’s storyline could have been written for him. The bassist from Flensburg, Germany has found his version of the American Dream. “I’ve been living it ever since my arrival in 1996 together with my wife, our two grown-up sons, our dog and the house in the New Jersey suburbs, just outside of big city.” As a matter of fact, he is one of a few German jazz musicians that were able to establish themselves on the New York jazz scene for good. His new album My Astorian Queen is a heartfelt thank you note to “this city and its welcoming artistic community in general, and some very special human beings in particular, that have guided and formed me over the last quarter of a century.”

He’s referring to the members of his quartet - all veterans of the New York jazz scene. Pianist Bill Mays was impressed by the classically trained bassist when he heard him for the first time at the North Sea Jazz Festival in Rotterdam in 1992. He started to mentor him as they recorded and toured Europe together with the late drummer Keith Copeland. “Bill used to fax me pages and pages of tunes that he wanted me to learn when I was still living in Cologne.”

Wind hadn’t even been in New York for 24 hours when Mays’ wife at the time, who worked at a hospital, introduced Wind to one of her colleagues. “On my second day in NYC I got to meet my future wife on a blind date – what are the chances?! The first couple of years were incredibly intensive and life-changing: my studies at NYU, the first attempts of making the scene, my marriage to Maria and the birth of our first son, all while living in a cute apartment in Astoria, Queens.”

The swinging opener, “Mean What You Say,” relates to a magical moment that Wind experienced at the legendary Village Vanguard. “It took several years before I got a chance to play a Monday night with the Vanguard Jazz Orchestra. While some of the last guests were taking their seats, the rhythm section started to play this great composition by Thad Jones. Already while setting up my gear, I had noticed how unbelievable my instrument sounded in the acoustics of this basement club: warm and chocolatey, yet incredibly clear and defined. That first night with this band was one of those NYC moments that I will never forget.”

While establishing his New York career, Wind took a wide variety of gigs including subbing on major musicals. Those theater jobs inspired him to record “Broadway.” “I got to play a dozen or so performances of Webber’s ‘Phantom of the Opera,’ which was not my cup of tea. I much preferred a production of Cole Porter’s fabulous ‘Kiss me, Kate’ with arrangements by Don Sebesky.”

Outstanding on this track is Scott Robinson, featured on the mighty bass saxophone. Robinson plays seemingly every reed and brass instrument ever invented, and Wind identifies him as “the voice of my music.” Robinson’s rehearsal and recording space, which he calls his laboratory, is home to many uncommon instruments such as a bass marimbaphone, a theremin and the extremely rare contrabass saxophone. “Scott and I share the same birthday, live in the same town AND he brews his own beer! He is an unbelievably spontaneous and sensitive musician who manages to still surprise and deeply move me after all these years of playing music together.”

Those who can’t get enough of the wonderfully growling sound of the bass saxophone will be happy to discover a short encore somewhere towards the end of the Brazilian song “E Preciso Perdoar,” which was made famous by João Gilberto and Stan Getz.

Wind’s third trusted friend and musical partner is drummer Matt Wilson, with whom he has spent more time on the road than with any other musician over the last 20+ years. “Matt was one of the first established bandleaders to invite me into his world and accept me as his equal. Because of him I started to believe that I might belong here. His presence is so liberating that you think you can fly - he welcomes everything you offer so completely that there really isn’t such a thing as doing anything ‘wrong’ around him.” With the classic Sinatra hit “New York, New York,” the two friends close out the album. Their approach is a lot looser than the original: “Matt and I love to use the term ‘going into the sandbox.’ It means to innocently sit down in the sandbox and to start molding, creating and truly playing with the material - and then react to what is starting to appear in front of you.” It seems that this approach is working: “After hearing our take, Bill Mays commented approvingly: ‘Man, you almost make me like that song!”

In every sense, this album turned out as a fitting and genuine musical gift to the metropolis and its soulful inhabitants. The compositions narrate some of Wind’s personal NY stories, and are presented with song serving, yet unpredictable arrangements.

It all adds up to a fitting tribute to the one person in Wind’s life that has made this ongoing musical adventure possible: Maria, his “Astorian Queen.”

When I first heard, and met, Martin Wind at the North Sea Jazz Festival several years ago I said to myself, "Here's a promising young bass player. He needs to come to New York and get roughed up a bit and continue to grow." I guess that would fall under the label "mentorship" (so important, and so missing on the jazz landscape today). Thankfully, I've had a lot of musical mentors in my life, and think I was one of his. Little did I know, when Martin came for an exploratory visit 25 years ago, that he would still be here in 2021, but I should've known! Over the years he's proven himself a consummate sideman and leader,and a composer/arranger at home in a multitude of musical milieux. A member of my trio (along with Matt Wilson) on several CDs, Martin's also returned the favor and had me on several of his projects, including this anniversary recording. Great to see him celebrate his 25 years on the scene with this recording.
'Yo, Marty..Mein Bruder.…Here's to 25 more!
Bill Mays, Shohola, PA, July 2021

Jazz and Worldmusic since 1989.
Based in Bremen,the city of the Townmusicians.

If you like My Astorian Queen (25 years on the New York Jazz scene), you may also like:

Bandcamp Daily  your guide to the world of Bandcamp

Sampa The Great joins the show to discuss her release, "As Above, So Below".